Note: This is obviously for brewery accounts, only.

There are 5 different categories of beer that the TTB defines for their report of operations. They are:

The below sections go into greater detail describing the five categories. You can also check out this quick video for more explanations and examples. How Beer Flows in TTB Tamer

What is considered the Cellar?

Once you enter Beer Produced by answering the question “How much beer did you produce?”, that amount is entered into the Cellar inventory. Beer doesn’t leave the cellar until it is either transferred into Racking or Bottling Bulk for kegs/bottles, or it is transferred into a tax determination tank/serving tank (in the case of a brewpub).

The Cellar category is also used for beer in barrels that is being barrel aged, or any other tanks/storage for unfinished beer (for example, a dry hopping tank or other beer aging tank).

We recommend that you report Beer Produced as the amount of wort that is transferred into your fermenter.

After fermentation, report any losses due to trub, hops absorption, etc. under the Losses tab as “from the Cellar”.

What is Racking Bulk and Bottling Bulk?

Simply put, Racking Bulk is beer currently being carbonated (in a brite tank, unitank, or keg) that will eventually end up in a final, packaged state and be sold in a Keg.

Bottling Bulk is beer currently being carbonated (also, in a brite, unitank, keg, or in bottles in the process of bottle carbonation) that will eventually end up in a final, packaged state and be sold in Cans or Bottles. 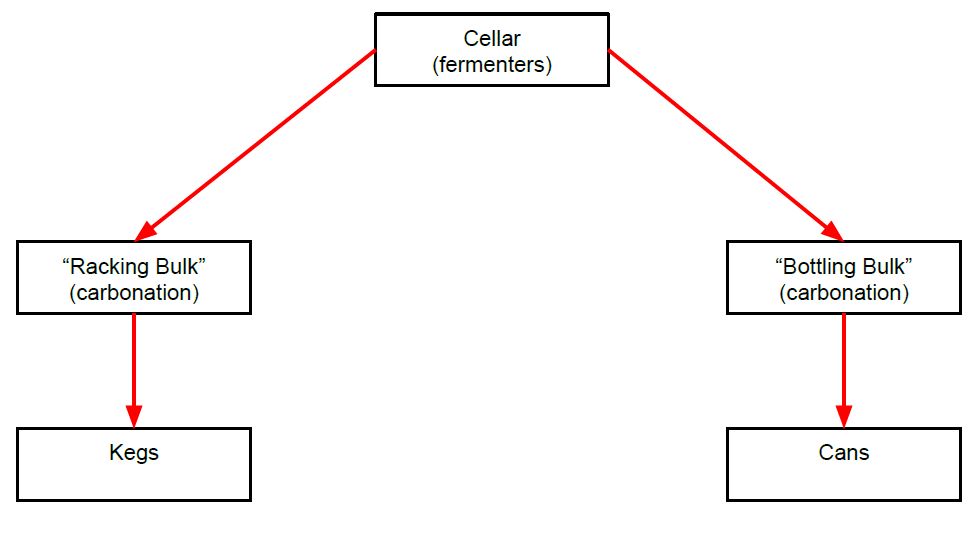 The two Bulk categories don’t need to be in separate tanks in your brewery! It is just fine if your Racking Bulk and Bottling Bulk is contained in the same vessel. For example, if you bottle and keg from a single brite tank, you would just need to keep the end product in mind when entering in how much beer is in these bulk categories.

When you put beer on carbonation, simply ask yourself:

“How many kegs do I plan to make?” -> This amount is entered into Racking Bulk during carbonation.

“How many bottles/cans do I plan to make?” -> This amount is entered into Bottling Bulk during carbonation.

We’ve put together a short video that go through a few different examples of how the beer flows through these processes using different brewery setups, you can read more and watch it HERE.

What are Racked Kegs or Bottled Cases?

Once you start Kegging or Bottling/Canning beer, these inventory amounts will be calculated based on the amounts you enter in the Racking & Bottling section of the Make Entries page.

This site uses Akismet to reduce spam. Learn how your comment data is processed.